Use in air conditioning

For the past 30 or more years most central chilled water plants have used primary-secondary pumping arrangements as shown in Figure 1. The primary system includes all equipment to the plant side of Points A and B and the secondary system includes all equipment to the load side of these points. The majority of these systems have the chillers staged from flow. As the flow in the secondary starts to exceed the flow in the primary, an additional primary pump and chiller is staged on. As the flow in the secondary decreases, so that one less chiller can handle the reduced flow, a pump and chiller is staged off. This method of control assumes that the load is proportional to flow and that the ΔT between the chilled water supply and return is constant and at the design condition

In air conditioning systems, chilled water is typically distributed to heat exchangers, or coils, in air handling units, or other type of terminal devices which cool the air in it’s respective space(s), and then the chilled water is re-circulated back to the chiller to be cooled again. These cooling coils transfer sensible heat and latent heat from the air to the chilled water, thus cooling and usually dehumidifying the air stream. A typical chiller for air conditioning applications is rated between 15 to 1500 tons (180,000 to 18,000,000 BTU/h or 53 to 5,300 kW) in cooling capacity. Chilled water temperatures can range from 35 to 45 degrees, depending upon application requirements.

In industrial application, chilled water or other liquid from the chiller is pumped through process or laboratory equipment. Industrial chillers are used for controlled cooling of products, mechanisms and factory machinery in a wide range of industries. They are often used in the plastic industry in injection and blow molding, metal working cutting oils, welding equipment, die-casting and machine tooling, chemical processing, pharmaceutical formulation, food and beverage processing, vacuum systems, X-ray diffraction, power supplies and power generation stations, analytical equipment, semiconductors, compressed air and gas cooling. They are also used to cool high-heat specialized items such as MRI machines and lasers.

The chillers for industrial applications can be centralized, where each chiller serves multiple cooling needs, or decentralized where each application or machine has its own chiller. Each approach has its advantages. It is also possible to have a combination of both central and decentral chillers, especially if the cooling requirements are the same for some applications or points of use, but not all.

Decentral chillers are usually small in size (cooling capacity), usually from 0.2 tons to 10 tons. Central chillers generally have capacities ranging from ten tons to hundreds or thousands of tons.

There are basically five different types of compressors used in vapor compression chillers: Reciprocating compression, scroll compression, screw-driven compression, and centrifugal compression are all mechanical machines that can be powered by electric motors, steam, or gas turbines. They produce their cooling effect via the “reverse-Rankine” cycle, also known as ‘vapor-compression’. With evaporative cooling heat rejection, their coefficients-of-performance (COPs) are very high and typically 4.0 or more.

In recent years, application of Variable Speed Drive (VSD) technology has increased efficiencies of vapor compression chillers. The first VSD was applied to centrifugal compressor chillers in the late 1970s and has become the norm as the cost of energy has increased. Now, VSDs are being applied to rotary screw and scroll technology compressors.

Absorption chillers‘ thermodynamic cycle are driven by heat source; this heat is usually delivered to the chiller via steam, hot water, or combustion. Compared to electrically powered chillers, they have very low electrical power requirements – very rarely above 15 kW combined consumption for both the solution pump and the refrigerant pump. However, their heat input requirements are large, and their COPs are often 0.5 (single-effect) to 1.0 (double-effect). For the same tonnage capacity, they require much larger cooling towers than vapor-compression chillers. However, absorption chillers, from an energy-efficiency point-of-view, excel where cheap, high grade heat or waste heat is readily available. In extremely sunny climates, solar energy has been used to operate absorption chillers.

The single effect absorption cycle uses water as the refrigerant and lithium bromide as the absorbent. It is the strong affinity that these two substances have for one another that makes the cycle work. The entire process occurs in almost a complete vacuum.

Industrial chillers typically come as complete packaged closed-loop systems, including the chiller unit, condenser, and pump station with recirculating pump, expansion valve, no-flow shutdown, internal cold water tank, and temperature control. The internal tank helps maintain cold water temperature and prevents temperature spikes from occurring. Closed loop industrial chillers recirculate a clean coolant or clean water with condition addititives at a constant temperature and pressure to increase the stability and reproducibility of water-cooled machines and instruments. The water flows from the chiller to the application’s point of use and back.

The less common open loop industrial chillers control the temperature of a liquid in an open tank or sump by constantly recirculating it. The liquid is drawn from the tank, pumped through the chiller and back to the tank. An adjustable thermostat senses the makeup liquid temperature, cycling the chiller to maintain a constant temperature in the tank.

One of the newer developments in industrial water chillers is the use of water cooling instead of air cooling. In this case the condenser does not cool the hot refrigerant with ambient air, but uses water cooled by a cooling tower. This development allows a reduction in energy requirements by more than 15% and also allows a significant reduction in the size of the chiller due to the small surface area of the water based condenser and the absence of fans. Additionally, the absence of fans allows for significantly reduced noise levels.

Most industrial chillers use refrigeration as the media for cooling, but some rely on simpler techniques such as air or water flowing over coils containing the coolant to regulate temperature. Water is the most commonly used coolant within process chillers, although coolant mixtures (mostly water with a coolant additive to enhance heat dissipation) are frequently employed.

Process pump specifications that are important to consider include the process flow, process pressure, pump material, elastomer and mechanical shaft seal material, motor voltage, motor electrical class, motor IP rating and pump rating. If the cold water temperature is lower than -5ºC, then a special pump needs to be used to be able to pump the high concentrations of ethylene glycol. Other important specifications include the internal water tank size and materials and full load amperage.

A vapor-compression chiller uses a refrigerant internally as its working fluid. Many refrigerants options are available; when selecting a chiller, the application cooling temperature requirements and refrigerant’s cooling characteristics need to be matched. Important parameters to consider are the operating temperatures and pressures.

There are several environmental factors that concern refrigerants, and also affect the future availability for chiller applications. This is a key consideration in intermittent applications where a large chiller may last for 25 years or more. Ozone depletion potential (ODP) and global warming potential (GWP) of the refrigerant need to be considered. ODP and GWP data for some of the more common vapor-compression refrigerants:

With respect to the heat transfer mechanism employed, the main types are: 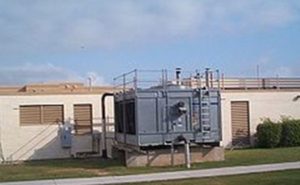